At first you don’t see the connection.
Sex has always come without consequences for seventeen-year-old Evan Carter. He has a strategy—knows the profile of The Girl Who Would Say Yes. In each new town, each new school, he can count on plenty of action before he and his father move again. Getting down is never a problem. Until he hooks up with the wrong girl and finds himself in the wrong place at very much the wrong time.

And then you can’t see anything else.
After an assault that leaves Evan bleeding and broken, his father takes him to the family cabin in rural Pearl Lake, Minnesota, so Evan’s body can heal. But what about his mind?

How do you go on, when you can’t think of one without the other?
Nothing seems natural to Evan anymore. Nothing seems safe. The fear—and the guilt—are inescapable. He can’t sort out how he feels about anyone, least of all himself. Evan’s never really known another person well, and Pearl Lake is the kind of place where people know everything about each other—where there might be other reasons to talk to a girl. It’s all annoying as hell. It might also be Evan’s best shot to untangle sex and violence.

“Packed with realistically lewd dialogue that is often darkly funny, this is a pitch-perfect, daring novel about how sex and violence fracture a life and the painstakingly realistic process of picking up the pieces. Evan’s struggle is enormously sympathetic, even when he is not. Utterly gripping.” – starred, Kirkus Reviews

“As the title suggests, debut author Mesrobian takes aim at big topics, but what she’s most interested in is the aftermath. Used to being the new guy, 17-year-old Evan may not be much at making friends, but he’s great at finding “left-of-normal” girls to sleep with. When he gets involved with Colette, who’s been labeled a slut by her ex—Evan’s jockish jerk of a boarding school roommate—things go very wrong…As Evan heals physically and mentally, he has ample time to consider the part of himself he calls “Dirtbag Evan” and reevaluate his attitudes toward girls and sex. By focusing on Evan, Mesrobian talks about hookup culture in a way that is character-based, not agenda-driven, and showcases a teenager who grows and changes without becoming unrecognizable or saintly. Ages 14–up.” —starred, Publishers Weekly

“This is an excellent book. It offers a realistic, unflinching look at teens and sex. Evan is smart and funny, in a wry, sarcastic way that is authentically adolescent. He definitely was a “dirtbag” in his pre-beating life, and still has some sexually predatory instincts. His journey to being a better person is an extraordinary one, populated with wonderful secondary characters who are all fully drawn and rich. The dialogue is organic, crisp and true. The topics are deep and relevant—sex and violence, of course, but also gender roles, therapy, PTSD, father-son relationships, class rivalry, drug use, and more. This is an amazing story, one that all older teens will benefit from reading. —Heather Pittman, starred, VOYA
“Sex & Violence is never what it seems. It never goes where you expect it will. It is funny, scary, brutal, and tender. It is an honest meditation on masculinity. And, it’s all delivered through the eyes of a damaged, genius-of-a-boy, Evan Carter, who you hope so hard will be okay.” -Geoff Herbach, Author of Stupid Fast

“This is one hell of an impressive debut, filled with a pervasive undercurrent of fear, tension, and uncertainty you get from staring down into the deepest, darkest, coldest lake. Sex & Violence deserves shelf space alongside the classics of adolescent-themed fiction.” -Andrew Smith, author of Winger, The Marbury Lens, and Stick

“A knockout blow of a debut. Powerful, funny, brutal, and true.” -Gayle Forman, author of If I Stay 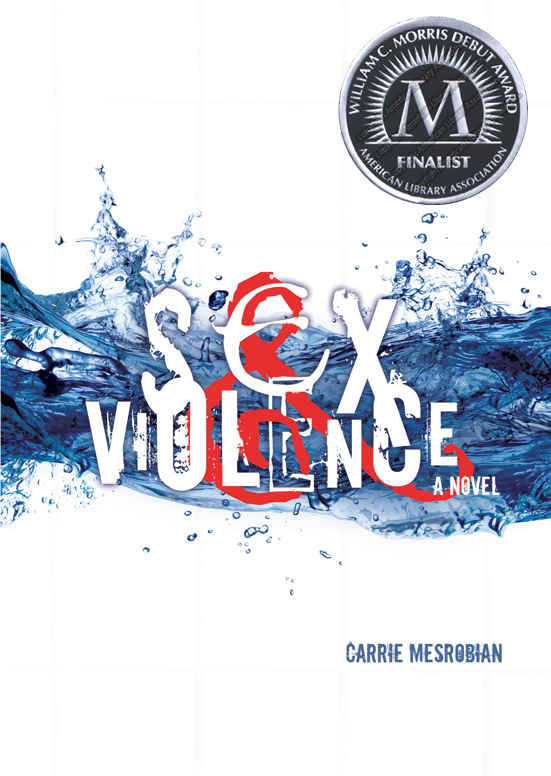